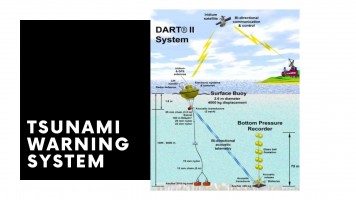 Prior to the Tsunami in December of 2004, there had been no major natural disasters in Phuket for generations.

Phuket Thailand received intense media coverage, but in reality, due to the geographical topography of the island and its bays, it was relatively unscathed. Some 120 km north of Phuket on the mainland, the resort destination of Koh Lak sadly suffered far more damage and casualties. Phuket with its good infrastructure and numerous hospitals became the regional center for the disaster and received most of the media coverage.
As a result of the 2004 Tsunami, a real-time Tsunami warning system was gradually put in place. This is part of an end-to-end warning system for the whole region.
A typical detection station consists of a bottom pressure sensor that is anchored to the seafloor, and a companion moored surface buoy. Information and relay data are then linked to ground stations through satellite links. The ground stations are linked to the NOAA system which provides live updates and subsequent warnings to the public when necessary.
The first Tsunami warning system buoy was donated by the US and deployed in 2006 about 1,000 km northwest of Phuket Thailand. A second Tsunami warning system buoy was deployed in 2007 and combined give the capability to provide a one-hour warning prior to a Tsunami reaching land.
Both buoy systems were updated and serviced in November of 2020 and re-deployed by the Royal Thai Navy. Each buoy contains two identical electronic systems to provide redundancy in case one of the units fails.
Experts say that Thailand has been at the forefront of efforts to coordinate regional information sharing on disaster warnings. Thailand's Tsunami early warning system is maintained by the Bangkok-based firm Raydant International. Raydant also operates the network of over 100 Tsunami warning towers located on the Andaman coast. These towers emit a 120-decibel alert that can be heard over 1.5km away.
In addition, the early warning system includes technology to sends alerts to mobile phones, radio stations, and television stations should a Tsunami be detected.
Phuket has clearly marked Tsunami evacuation routes leading from each beach to higher ground and safety.
If this unfortunate event should happen again, tourists in Phuket should feel safe knowing that there is a Tsunami warning system in place giving everyone approximately 1 hour to move to higher ground and to safety.